When my first son was born, I nicknamed him pickle.  Not for any real reason.  He wasn't green or lumpy.  In fact, he was a beautiful golden boy with a mound of dark, curly hair and the pinkest little lips.  He was the spitting image of my husband so I fell in love with him instantly and with ease.  I already trusted that smile, memorized those lips and I felt myself melt wrapped in those arms.  He was born with his eyes open.  The physical trait he most inherited from me.  Big, dark, oval eyes looking at us with razor-sharp focus, as if he was thinking, already, about who he would become and how we would fit into his life.

When my second son was born, I nicknamed him peanut.  Odd really, because he would be the only one of us to develop an allergy to them.  He was born bright red and wrinkly, screaming so loudly, his voice echoed throughout the delivery room.  Unlike his brother, his eyes were squeezed shut, we joke he wasn't ready to be born.  My sweet, kind boy clung closely to me for his first year of life. He, who I affectionately joked would prefer I had a pouch, like a mama kangaroo.  He was perfectly content burrowed in a wrap, tight against the warmth of my body, only peeking out with a toothless smile when he saw fit.

Born three years apart, I fell hard and deeply for my guys.  Their beauty.  Their energy.  Their curiosity.  Now five and almost eight, they still squeal with glee at a chocolate chip pancake or a butterfly that lands unexpectedly on the car's passenger side door.  I am proud I was chosen to be their mother.  Every single day. 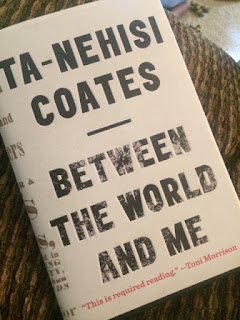 I recently finished Ta-Nehisi Coates's book Between The World and Me.  In it, Coates writes to his son about race, humanity and navigating this life in a black body.  When I knew the book would adopt the narrative of a father speaking to his son, I knew I had to read it.  I listened to it on audio with the spouse and then read it in print to linger a little longer in the language.

There are so many themes in the book that stopped me.  Halted me really.  Left me sitting in my chair short of breath.  He ran a highlighter along things I had been reluctant to see.  The most profound of which was Coates hard-hitting words on fear.  Fear growing up amidst the sickness of the inner city and the fear he felt from the adults around him who loved him so hard, it hurt, and most significantly to me, his fear as a father of a black son.

I identified with the fear.  From growing up as a black girl in New York City, to loving my beautiful black sons. Reading his words forced me to confront how deeply I feel afraid.  In some ways, I think it was the universe's way of toughening me up to give me two black boys to love.  To make me a heterosexual female who fell in love with a black man.  I am sensitive.  My mother crowned me with that label as a child. Emotional wounds have always felt deeper for me and the pain felt by people I love always struck me as deeply as my own. The people I love the most walk this life in black bodies. A fact that, as of late, has been nothing sort of torturous to my sensitive soul.

In his book, Coates speaks of an experience taking his son on a visit to a preschool with his wife. His son jumped right in with the other children.  His first instinct, was to grab his arm, pull him back and say, "We don't know these folks! Be cool!" He didn't.  "I was growing," he wrote.  "...and if I could not name my anguish precisely I still knew there was nothing noble in it.  But now I understand the gravity of what I was proposing - that a four-year-old child be watchful, prudent, and shrewd, that I curtail your happiness, that you submit to a loss of time.  And now when I measure this fear against the boldness that the masters of the galaxy imparted to their own children, I am ashamed."

I read this and cried.  I saw myself in this passage.  Governing my own children's moves and reactions.  Curtailing their happiness in favor of my wariness.   "Don't get too close to that child." "Don't be the loudest at the party." "Don't touch another child's toys at the playground." "Don't dance to wildly at the school picnic." I am so very afraid and reading his words, I felt so very ashamed.

Truth is, I am afraid for my beautiful boys.  I am afraid of the looks my taller than average eight-year old gets when he moves with too much eagerness in public.  The excitement that bubbles in him animating every long limb he is not quite accustomed to navigating. I am afraid of his sensitivity.  The tears he cries when his feeling are hurt.  The frustration he releases when he doesn't feel heard.  I am afraid for his fearless intelligence.  His insistence on questioning everything.  His cleverness and keen ear, picking apart questions so well, adults forget the answers.  I am afraid of the grown-up teeth squeezing their way into my five-year old's mouth.  The changing contours of his baby face.  His burgeoning athletic frame, broad like my husband.  I am afraid for his charm.  His beautiful smile.  His ease with and adoration of little girls.  I am afraid for my boys.  Their huge spirits moving in black bodies with little knowledge of the hurt that awaits them.  The limits people will place on them.  And the ill-will strangers will project on them.  Or the dangers that arise in policing them.

Reading Coates's words, I felt damaged by my own wounds. I was only ten when a person with white skin first made me feel inferior because of my black skin.  She called me "black" on a school bus.  Hissed it.  Because I took a seat she thought rightfully belonged to her.  I still remember her icy eyes, staring at me in hate, as if any triumph I could ever feel would always be marred by the body I was in.  I knew what it felt like to be judged before I said a word.  To be presumed guilty and have to prove my innocence.  To be presumed ignorant and have to prove my intelligence.  I am hard on my boys because I want to protect them but the reality is my protection can be suffocating. I am chipping away at their beautiful spirits.  The parts of their humanity that introduced themselves even as infants, as their skin first parted the air in this new world.  I've become so consumed with how this world will react to them, I almost forgot to nurture and respect how they will react to the world. How they might even change it.

I want my children to be free. In order to do that, I may have to be one of the ones to step out of their way.

Thank you for your words, Mr. Coates.