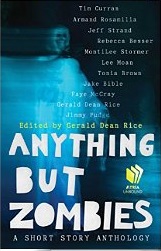 I don't really consider myself a horror writer... per se.  I enjoy writing horror, I enjoy reading horror... I even enjoy watching horror but I'm usually doing those three things covered in a blanket, preferably buried in my husband's armpit and on the verge of having a heart attack.  Call it a byproduct of an active imagination but for at least 24 hours after I do any of the above, I am convinced the circumstances of said horror are likely to happen to me.  Who am I kidding... the side effects of a good horror never wear off.  My kids toys still resemble Chucky and I can't take an innocent bike ride without planning an escape if that runner nearby turns zombie.  With that being said, I was really, really excited to participate in the horror anthology, Anything But Zombies.

I was recommended by an editor I met while querying Boyfriend.  He became of a fan my zombie shorts in Dani's Belt's and thought I'd be a great fit.  I had been so immersed in the zombie world for so long, it was a real challenge to think of something equally scary that did not involve the blood sucking undead.  Nonetheless, when I started writing about Tiffany and Ben in Out of Mind, I could not stop!

Out of Mind, my contribution to Anything But Zombies, follows a young woman as she travels to a well-needed country respite with her boyfriend after witnessing a crime.

Read an except below and then buy it NOW here! Every story is awesome and I promise I'm not just saying that.  I have 11 brand new things to be terrified of.

Except from Out of Mind in Anything But Zombies:

It had been four minutes since I’d thought about the dead girl at the party.

Four minutes and about ten seconds if you count the tone-deaf riffs Ben and I attempted after the song was done.
Then he looked at me, smiled and ruined it.  Reminding me that he was, in fact, trying to distract me from the dead girl while simultaneously reminding me that nothing could really distract me from the dead girl.
That was the pesky thing about dead girls.  They were impossible to forget.
Less than forty-eight hours earlier she was slumped at my feet, her thick blood pooling onto the sticky dance floor between us as her life poured from the smoky bullet hole burrowed into her toned tummy.  Her body shook and shuddered as the stampede of screaming partygoers rushed toward the exit, trampling her beautiful salmon-colored dress.  I stood beside her, speckled in her blood and still.  My scream was stuck like a gumdrop in my throat, my feet frozen in place.
“Are you okay?” Ben looked at me uncomfortably from where he sat behind the wheel of his small sedan.  He spoke in that same reluctant tone he had when I showed up at his apartment that night covered in her blood.  Like he wasn’t sure if the title of “sort-of ex-fiance” made him qualified to deal with dead girls and blood stains.  Drunk, mid-sex proposals make for a tenuous kind of commitment.
The night I went to the club, Ben and I were on a break.  I’d found a phone number for Katie-with-a-heart-over-the-‘i’ buried in one of his pockets and listened to him stammer out an epically weak explanation about how it got there.  They weren’t his pants or they weren’t his pockets, he didn’t even know his pants had pockets.
“Drink,” a co-worker I’d confided in said the minute we got to the club.  She placed the Tequila shot in my hand and watched me throw it back.  She barely gave it time to burn its way down before handing me another.

Maybe if I hadn’t been drowning in Tequila when the dead girl was shot, I would have had the good sense to run.  Instead, I stared down at her in a sort of dream-like fog, not entirely sure she, or even I, was real.
Read more HERE.