He's up from nap.
He stretches his long legs out over his blue and green sheets, snuggling his curly hair into his pillow.  He opens his big brown eyes and looks at me, a soft smile on his face, then he closes his eyes again, turning so his chubby golden cheeks nestle deep into his pillow.  He curls in a ball, drawing his knees to his chest and breathing softly.  He looks so tiny in his new big boy bed.  His three-year-old frame only making up a third of its length.  The rest crowded with his stuffed animal friends and fluffy comforter.
Are you up, baby?
I whisper it, kneeling beside his bed and breathing in his smell.  He smells like cookies and clay.  From the morning of playtime and the snack he just had to have.  I kiss his nose and he wipes it away, sitting up slowly.  His bare feet dangling over the edge of his bed and his eyes still hanging low from sleep.  I watch as a soft yawn escapes his tiny pink lips.  I remember him as the colorless baby, swaddled and content, nestled in my arms as I dreamed for him, wondering what his new life would bring.  Fresh steps, new soul.
Now, he reaches his arms out for me and I lift him.  Letting him nestle his head into that soft dip near my collarbone, and wrap his little legs around my waist.  I feel his body release a heavy sigh.
He is safe and he feels it.  I run my hand over his warm back, and I do too. 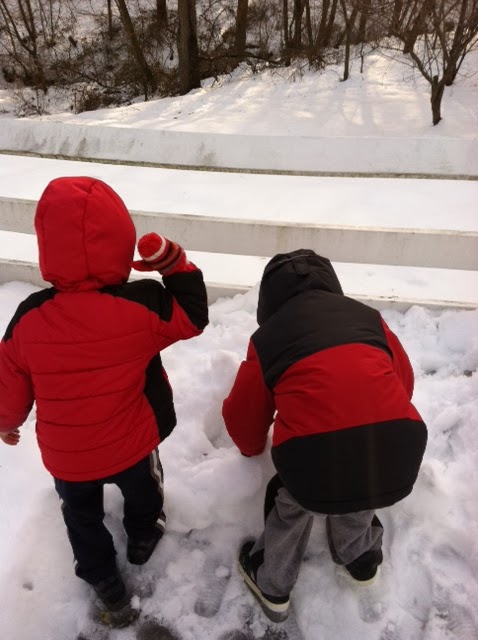 He fills me.  My soul forever pregnant.  Giving birth to thoughts and plans of his life and his brother's, mine, ours and theirs.  I remember the love that made them.  The love that sustains them.  I nourish it so we witness them hand-in-hand.  I nourish my mind so I don't miss a moment.  I dream of being silver-haired and watching the children they make, play off a country porch, their shadows dancing at sunset in a lake.  Smiling to myself, content.  Lived and full.

But now I cry.

My tears are puddles at my feet.  Joining in the streams that fill the rivers, staining the Diaspora.  For Lucia and Sybrina.  For Emmett, Addie Mae, Cynthia, Carole and Denise's Mommies.  For Hadiya's Mommy.  For Baltimore's Mommies.  For Chicago's.  For Detroit's.  For New York City's.  For all the dreams halted by bullets.  The joy buried in caskets.  The Mommy's whose babies they were helpless to protect.  Guns loaded with worthlessness both mandated by a careless society and perpetuated needlessly by its victims.

It's all hate crimes.

I once again lower my head beneath a stream of water and wash a festering sore.  Hoping to rinse away the virus infecting my dreams.  The virus that worries about the evil in others, the criminalization of the beautiful brown skin love made, and the lowered expectations of every teacher under a brainwashed spell.  That virus that caused me to worry when my sons grew out of their toddler clothes because I knew it was only a matter of time before the world stopped seeing the beauty I did.  Before those kind smiles and waves from strangers, became purse clutching, eye-avoiding fear, nurtured and fostered by an unkind media and an unfair justice system.

I place a Band-Aid on the festering sore and dream awake.  The lullaby of lies is only comforting to the unconscious.

My eyes are open now.

*In 2012, after an argument over loud music, Michael Dunn, a 47-yr old white Floridian fired ten shots into a carful of unarmed black teenagers, killing Jordan Davis, a seventeen year old boy.  Yesterday, after more than thirty hours of deliberation, a jury found Dunn guilty of three counts of attempted second degree murder and one count of firing into an occupied car.  A mistrial was declared on the first-degree murder charge.