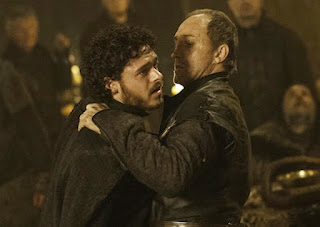 Well, like many Game of Thrones fans, I have spent most of this week recovering from probably the most traumatizing thing I have ever seen on television.  Sunday's episode of the HBO show featured the infamous "Red Wedding" where a series of mistakes and bad decisions led to the slaughter of three [and a half... ugh :-(] series regulars and favorites at a wedding.  The dearly departed were probably the closest thing to "protagonists" that the series - which features multiple kingdoms vying for the throne (hence the title) - had.  Though in retrospect, there were countless clues, on Sunday night, at approximately 9:49pm, I stood up and screamed like my house was under attack.  I then proceeded to curl in a ball on my couch for at least a good thirty minutes.... only managing to text, tweet and status update my feelings over a big mug of Chamomile Tea.  You would have thought I had been the victim of a crime.  The gut-wrenching, blood curdling scream of one of the characters is still ringing in my ears.

Since the airing, a number of videos have been released depicting the reactions of fans, including this awesome one of George R.R. Martin (who wrote the novels) watching some.  Those who have read the books (which the series has stayed remarkably true to) filmed their friends watching what they knew was coming.  The videos feature people jumping out of their seats, breaking into tears, and hiding under blankets.  Reactions may seem bizarre to the uninitiated but trust me, if you had been watching (which I suggest you do), you would have been doing the same damn thing. 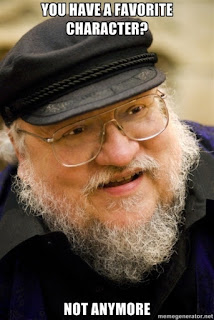 As a reader/viewer, I kind of hate George R.R. Martin for taking me on this journey.  Then again, I kind of love him.  Like a bad marriage.  The rollercoaster of emotions I have felt in the year that I have been watching this show (I was a late bloomer and caught up a few months prior to Season 3), has been unparalleled by any art I have ever consumed (though The Walking Dead is a close second).  As a writer, I am in awe.  George R.R. Martin has taken his time in creating a universe that is rich in detail and complexity.  We have gotten to know the characters: their motives, their history, their families, and the things they love.  He has truly blurred the lines between good and evil as their are no clear villains...  just people who make choices.  Some good.  Some bad.  It's a genre-bending, fantasy universe that is remarkably accurate in its depiction of humanity.  Once my initial shock wore off on Sunday, I had a moment where I thought... man... that was really, really good.

As I mentioned before, in April, I attended the Writer's Digest Conference East.  On the last day, I attended a session with Paula Munier from Talcott Notch on writing the first ten pages of a novel.  It was awesome.  One of the (many) gems she gave us as take-homes was to make sure your reader "feels something" in those first ten pages.  Some kind of emotion.  Something that keeps your reader reading and gets them to care about the story and your characters.  She gave us a number of examples of powerful openers including my favorite from The Lovely Bones by Alice Sebold: My name is Salmon, like the fish; first name Susie.  I was fourteen when I was murdered on December 6, 1973.  That gives me goose bumps every time I read it.

Watching Game of Thrones, I realize there is a difference between genuine emotion and a manipulative kind of emotion (i.e., Color Purple v. For Colored Girls (movie not book)).   You know horrific things that you can make sense of (Sophia getting beat down in Color Purple) versus horrific things done purely for shock value (Michael Ealy throwing the kids out the window in For Colored Girls).  The reason I hate George... but really love him... is because I can understand why he wrote it.  Everything (and I mean from Season 1, Episode 1) of  Game of Thrones led to those ten minutes.  And as much as you disliked that it had to go down, when the dust settled, you understood it.  Because George was able to full develop characters and situations that understandably led to that that kind of tragedy.

Brava, Mr. Martin (and all the folks over at HBO) for really getting it right.