Every Thursday night, I am glued to my television screen watching Scandal, ABCs prime time drama about Olivia Pope (played by Kerry Washington) a political crisis negotiator in Washington, DC.  The show is many things.  It is thought-provoking, innovative and bold, but the biggest draw of the show is undeniably Olivia's hot affair with the President (played by the guy who hired Willie Lopez to kill Patrick Swayze in Ghost). 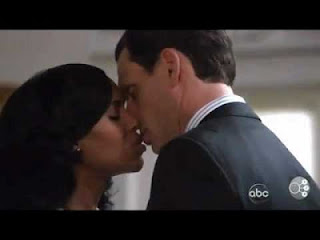 It's hot on so many different levels.  He's married.  She's not.  He's a white republican.  She's not.  It has all the elements of that which is "oh, so wrong" but "oh, so friggin' right."  He looks at Olivia like she has the secret to world peace between her thighs and she looks at him like a big piece of moist chocolate cake (err, vanilla).

Inevitably, when the show is over, Facebook and Twitter starts a-buzzin'.  Everything from "Olivia, you need to leave that married man alone, girl!" to "He should just leave his awful wife and finally make an honest woman out of Olivia."

This past Thursday, my bestie and I were having our post-Scandal (and Grey's Anatomy) wrap-up when the topic turned to monogamy.  We wondered, what was it about the show that made people continue to watch despite the fact that she is sleeping with a married father of three?

I mean, not just watch but root for her.

I'm not gonna lie.  I sit on the edge of my favorite chaise waiting for the two of them to get down each week - or at least engage in a little heavy breathing and staring at each other's lips (see above).  But, in another world, Olivia Pope's character could easily be a villain.  She throws her stuff in that married man's face like she has Pussycat Dolls "Don't Cha" pumping through her veins.

But no... Olivia Pope is the show's heroine.

This topic was particularly interesting to me because my novel takes on this kind of unlikely protagonist.  When I sat down to write my novel five years ago, it was a cathartic experience more than anything else.  I sat at my computer shortly after I had my first son and thought to myself,  wouldn't it be interesting to write a novel about a bad guy?  I had kissed my fair share of frogs and alot of my single friends were telling me incredible stories about guys that hurt them in unimaginable ways.  We had even nicknamed them - "the asshole", "rat bastard", "that dude that cheated on me with the Cambodian girl"... If we could set fire to the memory of these cast of characters, we totally would.  But sitting at a computer screen that day in 2008, I thought to myself - these guys couldn't be all bad right?  They didn't just wake up one day and think, "I'm going to be a dick.  I'm going to find some innocent girl sitting in a lounge, cheat on her, ruin her credit and post pictures of me doing it on my secret Facebook account."  From there, I wrote a 265-page first person narrative exploring why/how my protagonist, Nate Best, became so bad.  You may not always like him, but my goal was to understand him because let's face it, us once-scorned girls need to understand him.

Watching Scandal, I started to wonder if I had done enough to make my readers want to take the ride with Nate.  I started to think more about the layers of Olivia Pope - what makes what she is doing okay?  Why do Scandal fans tune in each week to take the ride?  I realized it came down to three things: 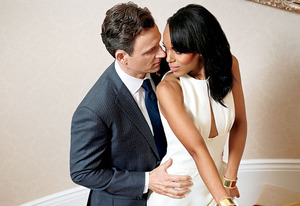 2) She feels really, really bad about it. 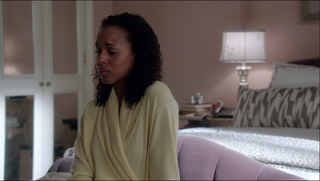 and 3) The President's wife is a raging lunatic.

These three things make her questionable behavior a whole lot easier to swallow... but totally unrealistic in real life.

Look.  I'm married.  I'm going to be pro-wife.  I don't think most mistresses are tortured by their affairs any more than most wives are raging lunatics.  The way I see it is, in a marriage, no one (NO ONE) knows you better than your spouse.  Good and Bad.  For example, your spouse may like to shit and cry everyday at 5pm and you are the only person on the planet privileged enough to know that information.  It's disgusting but you love him/her anyway.  One day, a man/woman may come along who makes your spouse feel like they are the best thing since apple pie.  They know nothing about the shit-cry sessions and that makes your spouse feel good.  Understandably, it makes your spouse feel good.  The newness of being with someone who doesn't know anything about you at your absolute worst is undeniably appealing.  I get it.  I don't condone it.  But I get it.  Any married person who says otherwise is lying.

The problem is, that kind of realness probably wouldn't make for good television.   I mean, what if Olivia's vagina couldn't cure the President of his alcoholism or they way he berates his kids?  I don't want to see that crap.

My goal in writing my book was to take a more realistic look at fidelity and scandalous (pun intended) behavior.  All the little cracks and tears that drives a person to cheat and lie... not just the good, secret sex or "villainous" girlfriends/wives.

In the end, the show is my not-so-guilty addiction and I will be tuning in next week.  But honestly, does anyone think Olivia Pope will really get her happy ending?