One of my favorite movies of all time is Dirty Dancing. 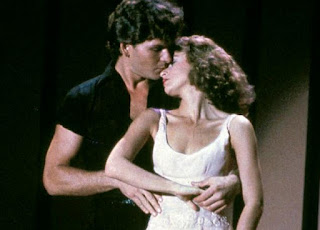 I distinctly remember being about nine years old and sitting in my friend Nikki's room, sneak-watching her teenage sister's VHS copy of the movie.  For two hours, I sat cross-legged with my jaw slack as I gawked at lustful, sweaty, twenty-somethings grinding on one another to music from the sixties.  And when he walked in... you know who I'm talking about... Johnny, or Mr. Patrick "Hotness" Swayze, with his mullet, tight dancer pants, dark shades and pouty little pink lips... I was confused as shit.

Suffice it to say, black girls from Queens who are head over heels in love with artists like LL Cool J and Play from Kid & Play are NOT supposed to like dancing white boys with mullets.  I was in the closet for years.


Anyway, it didn't take me long to realize I was not alone in my love of Dirty Dancing.  I would say the obsession is fairly common among 80s babies.  Symptoms include a complete inability to turn the channel when it's playing and butterflies every time you hear someone with a deep voice say, "Now I... (had the time of my liffeeee...)."   It crosses all boundaries, colors and creeds... and I would wager at least half of the magic was due to Mr. Swayze (RIP, handsome). 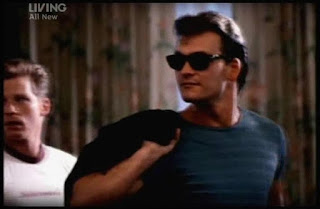 A few years ago, I was reading an article about Dirty Dancing writer, Eleanor Bergstein.  She admitted that the screenplay is somewhat autobiographical: she used to dance dirty, was called 'Baby' until she was 22, and spend summers with her parents in the Catskills (the setting for the movie).  It was unclear whether there was a "Johnny" or not (HELLO if there was, rarr) but it was clear the story was close to her heart.

Dirty Dancing was a simple movie.  Good, sheltered, rich girl meets "WILD!", poor dancing boy (who may or may not have been working as some sort of male escort (woman "stuffing diamonds in his pockets," hmm...).  No one approves.  She "hurts her family... he loses his job anyway..." but ultimately, he changes his bad boy ways to be with her, learning "there are people willing to stand up for other people, no matter what it costs them."  (I'm going to be 80 years old, and still remember those lines).     It didn't win any awards or place Bergstein amongst the elite of Hollywood.  But, it touched so many people and has become a classic, in its own right, to all those who love it.

Over the years, I've realized it's the honesty that has set it apart.  As a woman, there are so many aspects of the movie I have come to love... Baby's awkwardness, the pro-choice subplot, and even Baby's mature acceptance of the end of the relationship.  It would have been a completely different movie if Baby and Johnny eloped at the end and she gave up her future to be a painter's wife.
No...
She wrapped her arms around his waist, looked into his eyes, and said "I'll never be sorry."
And I believed her.
In my head, after that last dance, they got busy one more time, and she went home.  Starting Mt. Holyoke in the Fall... just like she planned.

As a writer, I am inspired by Eleanor Bergstein.  I am inspired by her honesty.  Her willingness to write a simple story from her heart and make us believe in it.  I saw an interview with Tyler Perry on OWN last week where he responded to his critics by saying his stories are what he knows.  He said simply, "The people that don't get it don't matter as much as the people that do."  Love him or hate him (and I plea the 5th on that one), you have to admire that and (love it or hate it) it's working out really well for him.  Stephen King said something similar in On Writing.  In school, he was known as a great writer but his teachers thought he was "wasting his talent" by writing that horror "crap".  He loved that horror crap so he wrote what he loved.  I think we can all agree it seems to have worked out for him too.

That wise old adage seems to constantly ring true, doesn't it? Stay true to yourself.  Stay honest in your art.  Don't give in to gimmicks and remain confident the audience will follow.  Like Tyler said, the people that get it matter far more than the people that don't.

Who would have thought I'd be quoting the guy who dresses up as Madea...