A little bit of Inspiration


My hubby and I had plans to see Justice Sotomayor at a book signing/lecture in Baltimore last night but our youngest got sick :-(.  So, we stayed in instead.  With a bottle of red wine and a bowl full of popcorn ('cause that's how we do), we settled down to watch Celeste & Jesse Forever  a movie starring Rashida Jones and Andy Samburg (of D*ck in a Box fame).  Here is the trailer:
So truth be told, I have always been a little obsessed with Rashida Jones.  Not only is she gorgeous, but her performances in movies are so subtle and natural, you can almost trick yourself into thinking she isn't acting... like you know her and you just happen to be a fly on the wall in her life for a moment.  Plus, I think it's awesome that she is Quincy Jones's daughter... sometimes unbelievable artistic talent is inherited.

Anyway, the movie, written by Jones and Will McCormick (who plays a role in the movie), is about a divorcing couple, Celeste (played by Jones) and Jesse (played by Samburg), who struggle to maintain their friendship while moving on.  Without giving anything away, I loved this movie because I so thoroughly identified with the characters.  It was such a character-driven plot; the conflict solely rested within the struggles of the protagonist.  Namely, Celeste, whose type A, "always right" personality prevents her from valuing her relationship with Jesse.  I also loved this movie because it was a story about my generation: 30-somethings who speak the way I speak, make the kind of jokes I find funny, and listen to the kind of music I like (I already bought the soundtrack). 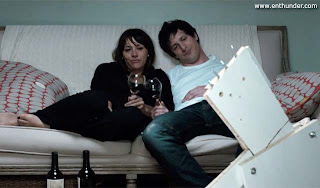 In short, it is precisely the kind of story I want to tell.

So, I guess I should amend my previous post about complete isolation from the big black box.  Make no mistakes, isolation is goooood for the creative soul.  Some days, if I could plug my laptop into the non-slimy wall of a bugless, cave with just a lantern and a desk, I totally would but art... whether its a good book, a vivid painting, two ravens getting their flirt on or a well-written movie... is inspiring.

So, rent the movie! I wasn't paid to say that so you should trust me!