When I was in college, I had an amazing writing professor named John Vernon.  He was the first person in my adult life to encourage my writing  (that wasn't my Ma, brothers or friends).  He even tried to persuade my mom to allow me to spend a semester in London.   Ever the overprotective mom, she wasn't convinced (but I somehow managed permission to go to Senegal for three weeks during my last year of college).  Truth be told, I am still a little sad I never got to go.  Being an American writer abroad has a certain appeal, doesn't it?

Anyway, in one of our conversations/classes, I remember Prof Vernon making a comment about a fellow writer, Wally Lamb.  Wally wrote one my favorite books of all time, She's Come Undone which went on to be an Oprah's book club selection in 1996.  I remember Professor Vernon said - he went from being a professor to a millionaire.  Pretty much just because Oprah liked his book. 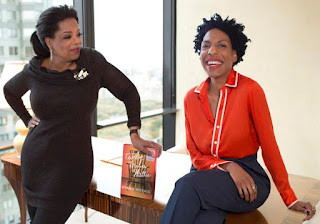 My best friend works over at Harpo Productions in Chicago and a part of her job was to work on Oprah's 2013 book club selection, The Twelve Tribes of Hattie by Ayana Mathis.  When she was finally able to divulge what she had been working on for months, she could barely contain her excitement.

"It is her first book! She reminds me so much of you," my best friend, and one of my biggest cheerleaders for the past 16 years, gushed.  She practically insisted I watch her on Oprah's Super Soul Sunday two weeks ago.

I DVR-ed it so I didn't watch it until a week after it aired.  Curled up under a blanket on my favorite chaise with an oversized cup of hot tea, I was smitten.  Have you ever seen someone who is living the exact life (professionally) you hope to be living in the future?  Oprah aside (although her approval would be a nice perk), Ayana's goal is to write character driven stories that are so thoroughly human they practically curl up next to you and take a sip of your tea.  She articulated a desire to create multilayered characters that, though unique due to race, class and other circumstance, are human and relatable... by all who read them.  The theme of the episode seemed to be how reading is an opportunity to take a path you wouldn't ordinarily take - an opportunity for a suburban housewife to live as a death row inmate or a middle aged male banker to experience life as an overweight teenage girl.

Ayana's goals as a writer and even her take on spirituality and divinity seem to mirror my own journey.  Although, I am admittedly much closer to my starting point.  I actually got emotional watching her! She was poised, thoughtful and funny - at the end of the interview she revealed how surreal it felt to be sitting on the stage discussing her book with Oprah because to her - the book was still "that word document."

That made me laugh out loud.

So watch the doc here. Meet Ayana. Pick up the book and be inspired.  I was :-).